What kind of math does music use?

This is from a conversation over Facebook with my friend, Adam who has a BA in Music Education. I found it really interesting even if it was just a peek into the music world with math-colored glasses on.  It makes me want to explore math-music.

Me:  “I’ve been trying to think of some math problems and was thinking about the relation between math and music. I was curious what all math or logic you’ve noticed or experienced in music? Like, do you ever come across a problem where you have to solve for a note or measure? I could be asking complete crap because I’m not familiar with the terminology. Either way, I was just curious so I could broaden my horizons some.”

Adam:  “Since music is typically written out, “solving” for what’s missing is usually only done in improvisational pieces like jazz music or cadences in solos. Music was originally taught in the colleges in pre-Renaissance Europe alongside Mathematics, because music can deal heavily with numbers and formulas. 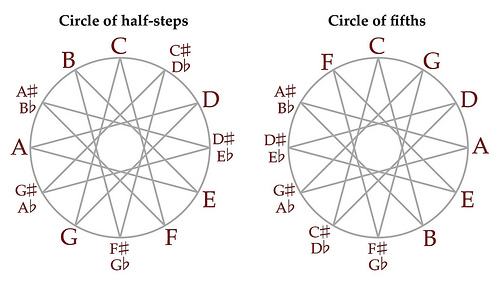 Because there are only 12 notes in conventional music, they have to interact with each other, and that’s when you get intervals and chords. For example, a C and a G are 5 half-steps apart, so we call the interval between them a Perfect Fifth. Counting is essential to musical theory, because being off by one half-step can be catastrophic to harmonic resonance. (C and F# is an Augmented Fourth, which is the ‘king of dissonance’, while C and G form the most stable interval of all, so you see what I mean.)

In more conventional music, there are actually styles of composition that are derived from mathematical formulas, too. Atonal pieces don’t use typical key signatures and melodies – instead, they can be composed by using matrices and variables to patterns in order to be written.”